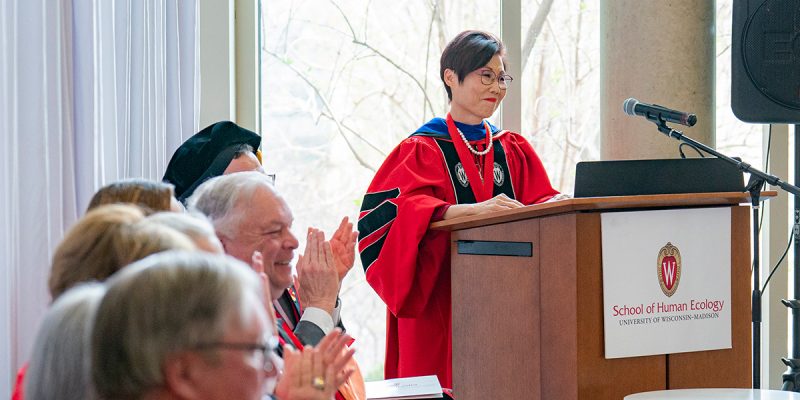 Soyeon Shim, PhD, Dean of the School of Human Ecology, has achieved one of the highest honors in academia: an endowed deanship, made possible by a collaborative group of visionary donors.

This marks the first time an endowed deanship at the University of Wisconsin–Madison has been named exclusively in honor of a woman. It is fitting for this historic occasion that the endowed deanship is named in honor of Elizabeth Holloway Schar, who championed the power of a collective to make a difference among fellow alumni, donors and friends.

At the investiture ceremony on April 29, 2022, Chancellor Rebecca Blank spoke of Shim’s outstanding leadership and presented her with a specially designed medallion that now adorns her academic regalia. Blank thanked Shim for her “extraordinary commitment and for reaching out beyond the walls of this school to advance the kinds of interdisciplinary initiatives that drive the university’s reputation for excellence.”

In her remarks, Shim expressed gratitude for the generous donors who made the deanship possible. “I am deeply humbled by the honor of being named the first Elizabeth Holloway Schar Dean,” she said. “Thank you for joining me in anticipating a future of unimagined possibilities and promise, not just for our students and faculty but for children, families, and communities in Wisconsin and beyond.”

Each of the donors who contributed to the endowed deanship received a medallion signifying their investment in the future. These individuals include Linda L. Ahlers; Leola Culver; Lynn & Gary Mecklenburg; Nancy Nicholas; Dorothy O’Brien & Richard Antoine; Elizabeth & Mark Schar; Jane & Patrick Thiele; and an anonymous donor.

Areas of focus and expansion supported by the endowed deanship include early childhood development and design thinking.

“I see a future where all UW students will graduate with a human-centered approach to problem-solving and strategic thinking,” Shim said. “I see endless possibilities. I welcome the challenges the future might bring because I am confident this is the time for Human Ecology to dream big and for our faculty, students, alumni, and friends to take bold steps to move forward toward a shared vision of excellence.”

Soyeon Shim, PhD has served as Dean of the School of Human Ecology at the University of Wisconsin–Madison since 2012, transforming it into a hub for interdisciplinary research, education and outreach. She led the school’s All Ways Forward campaign and exceeded the $50 million fundraising goal by another $25 million, which has helped to endow 15 fellowships, professorships, chairs, distinguished chairs, a deanship, and seven graduate fellowships. Shim’s scholarly research focuses on consumer decision-making and has won competitive grants totaling more than $1.5 million from federal agencies and private foundations. She has received numerous teaching, research, and leadership awards, and authored or co-authored more than 120 scholarly articles in refereed journals. Born and raised in Seoul, South Korea, Shim obtained two degrees from the College of Human Ecology at Yonsei University, followed by a PhD from the University of Tennessee. She spent 22 years at the University of Arizona prior to joining UW–Madison.

About the Investiture Ceremony Tradition

An investiture ceremony is among the oldest of traditions in academia. Originating in English universities and modeled after highly dignified knighthood ceremonies, investiture comes from the Latin phrase for “dress in robe.” In academic circles, the term has come to mean one who will don the university’s insignia and regalia. The installation of a deanship, professorship or an endowed chair is a ceremony of dignity, honoring academic traditions and protocols.