“She was the essence of family, professionally and personally.”

That’s how Elizabeth Holloway Schar ’75 describes her late Aunt Betty, the inspiration for the Elizabeth C. Davies Chair in Child & Family Well-Being, a position endowed by Elizabeth and husband Mark Schar with a “Morgridge Match.” In fall 2014, John and Tashia Morgridge gifted $100 million to match new gifts to support faculty excellence with endowed professorships and chairs at UW-Madison. 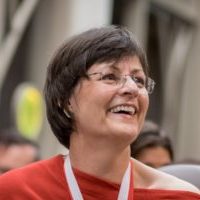 “We would introduce her as ‘My aunt, Elizabeth Davies’,” recalls Schar. “But she was quickly Aunt Betty to all–even her colleagues at the School of Human Ecology.”

To know Elizabeth Davies was to be swept into the orbit of an extraordinary woman, the consummate example of a professional who was generous with her time and intelligence. A leader in the burgeoning field of applied research disseminated through the University of Wisconsin-Extension, Schar recalls fondly, “She brought me into her circle of colleagues who also provided role models I valued.”

The Elizabeth C. Davies Chair in Child & Family Well-Being will be held by Larissa Duncan, Ph.D., who begins her career at the University of Wisconsin-Madison as an associate professor and extension specialist in the School of Human Ecology (SoHE.)  Dr. Duncan focuses on investigating the ways in which mindfulness and mindful parenting can promote psychological and emotional well-being of children, the quality of family relationships, and adaptive coping with stress.

“We are thrilled about the collaborative partnerships that this gift brings to the School of Human Ecology and our deep roots with UW-Extension,” says Dean Soyeon Shim. “The new position was critical to recruit Dr. Larissa Duncan, and will allow us to take a leap forward in our mission to improve the lives of children and families in Wisconsin and beyond.”

Friends, family, and colleagues agree that Elizabeth Carol Davies had amazing empathy for people, family and community and committed her life to the growth and development of strong families in the State of Wisconsin. “Betty was a wonderful mentor and became a dear friend, according to Karen Bogenschneider, Rothermel-Bascom Professor of Human Ecology. “She trained me when I began my career as a county Extension agent, inspiring me to see the potential of using research to build policies and programs that strengthen families. Years later, Betty attended a Wisconsin Family Impact Seminar that I convened for the state legislature and generously wrote out a check on more than one occasion to support the Seminars and my work to strengthen youth and families in the state that she served so long and so well.”

Born in 1916 as the third of seven children and raised on a farm in Wild Rose, Wisconsin, Davies’ life-long belief in the importance of families was formed by a deep love of her own family and community.

At the age of 22, Davies began her career as a high school home economics teacher in Luck, Wisconsin. Her work in family development expanded when she became a home economist at the University of Wisconsin Extension, first in Iowa County and then Sauk County. In 1952, she joined the University Extension as a district leader at the state level, developing adult and youth leaders through programs, including establishing a 4-H program on the Menominee Reservation. These achievements earned her a posthumous induction into the Wisconsin 4-H Hall of Fame.

Always seeking to improve her knowledge and understanding, Elizabeth received her master’s degree at Cornell University at Ithaca in 1956, with additional study at the University of Maryland and the Merrill Palmer Institute in Detroit, Michigan.

Davies championed her siblings—Myron, Ken, Margaret, Doris, Jane, and Daniel—in their own educational journeys and is remembered in the hearts of 40 nieces, nephews, grand nieces and grand nephews.

Davies often cited her admiration for pioneer Ellen Swallow Richards, the first woman faculty member of MIT who was widely acknowledged as the founder of the field of home economics, forerunner of today’s human ecology, the systems approach understanding of people in the context of their environment.

Dean Emerita Robin A. Douthitt fondly recalls Elizabeth.  Upon arrival in Madison in 1986 as assistant professor, Douthitt was welcomed by a cadre of women including Davies, who were or had been professors in Human Ecology.  They had each been leaders in research-based practice that established and still internationally distinguishes UW-Madison Human Ecology scholarship, and each were strong academic and policy leaders at a time when women in the academy were not treated with a parity of esteem.  Many of them devoted their entire lives in service to others, foregoing having their own families.

Betty was the last surviving “great dame.” She believed in the mission of the school and was never shy about promoting the deep and meaningful ways faculty impact the lives of Wisconsin citizens.  Douthitt noted, “She delighted in hearing about new faculty hires and research advancements.  Her passion was seeing that the faculty translated basic and applied research to inform family policy.”