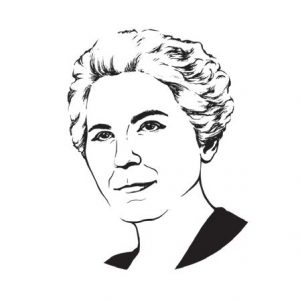 Known for her stern demeanor, Abby L. Marlatt (1869-1943) steadfastly championed opportunities for women throughout her thirty-year tenure as director of the Department of Home Economics within the College of Agriculture. Marlatt directed the expansion of the curriculum from a single major in 1909 to nine majors by 1932, seven years prior to her retirement. As enrollment grew, Marlatt negotiated moving the Department of Home Economics into a specially constructed building at 1300 Linden Drive. She was adamant about giving students the opportunity to apply what they were learning in the classroom to real-world situations. In 1926, the Dorothy Roberts Nursery School was founded and Marlatt was instrumental in facilitating observational and applied research opportunities for students majoring in early childhood development. Contrary to her austere reputation, she was known by faculty and students for her “soft heart,” which involved personally supplementing the Omicron Nu scholarship fund and paying medical bills for students in crisis. Many years later, a grateful student established an undergraduate scholarship fund in Abby Marlatt’s honor. A 2016 deferred gift from donors preferring to remain anonymous provided the opportunity to recognize Abby Marlatt as a 100 Women honoree.