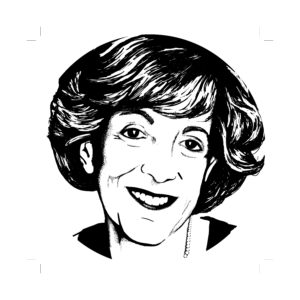 Growing up in Milwaukee, Audrey Feldstein Ross (1936-2005) spent her summers working for her father, William Feldstein, who, in 1945, established the sportswear label Junior House (later JH Collectibles). She enjoyed early success while working in the design room, selling the design for the iconic poodle skirt to Lord and Taylor in the 1950s.

Over the years, Audrey’s responsibilities evolved, particularly in the late 1970s after her husband, Kenneth, assumed the role of president and CEO of the brand. “She planned all of the sales conventions, sales meetings, dinners, and social events,” remembers her son Bruce who, with his sister Karen, chose to recognize their mother as a 100 Women honoree. “She was like the first lady of Junior House.” A steadfast and enthusiastic philanthropist, he says, Audrey “loved people who followed their dreams and she loved Wisconsin. She would share our enthusiasm for the direction SoHE is going.”