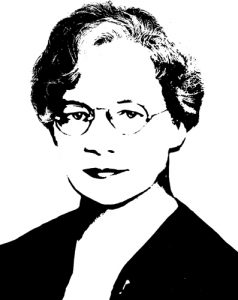 As director of home economics at UW from 1939 to 1961, Frances Zuill (1890-1977) fought fiercely for resources and respect for home economics, and expected those around her to share her determination. Zuill was born on a farm near Whitewater, Wisconsin. Determined to attend Stout Institute (now UW-Stout) but unable to pay for it, she taught at a county school in Utters Corners for two years to save up money. She earned a two-year diploma from Stout in 1913 and then taught at the North Dakota School of Science in Wahpeton through 1919. She then moved to New York where she earned a bachelor’s and then a master’s degree in Home Economics from Teachers College, Columbia University. She supervised home economics in the Baltimore public schools, was a visiting lecturer at Johns Hopkins, and was a visiting professor at Cornell and the University of Washington before accepting a position as chair of the Department of Home Economics at the State University of Iowa. After serving there for 15 years, she accepted the equivalent position at the University of Wisconsin-Madison. In Zuill’s 22 years at UW-Madison, the status of home economics was transformed from a department to a school, and in 1951 she became the first associate dean of Home Economics within the College of Agriculture.

Zuill raised money for and then oversaw the construction of the new Home Management House, the west wing of the Home Economics Building, and a new Preschool Laboratory.