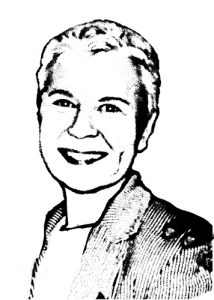 In 2010, Karon Ohm (BS 1984 Consumer Science), past chair of the Human Ecology Board of Visitors, gave a 100 Women gift to honor her mother, Jerry A. Goen Ohm (1928-1998). Jerry Ohm served as a vice president in the Brady Company, later renamed Brady Marketing Group, Menomonee Falls. For much of her life, she remained greatly affected by the death of her brother on Okinawa in 1945. Guy Goen was killed in action during World War II, while serving with the U.S. Army’s 96th Infantry Division. He had trained for the army at the University of Wisconsin-Madison Red Gym, and many years after his death, Jerry Ohm memorialized his service with a gift for a student lounge during renovations of the historic campus building. Thus, Karon Ohm felt it was appropriate to recognize her mother as a 100 Women honoree with a gift to the new Human Ecology building.