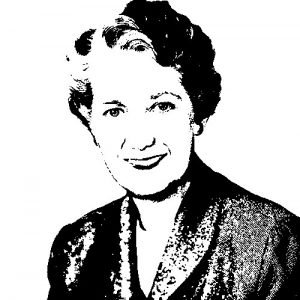 Louise Young (1910-2005) was honored through her estate gift and by a gift from Dorothy Luening (MS 1964 Home Economics Cooperative Extension). “She was talented and well respected.” After World War II, when consumer issues started receiving national attention, Louise was ready to help. For more than 30 years as an extension specialist in family and consumer economics, she taught Wisconsin residents to manage their finances and understand consumer issues.

Louise developed an early interest in finances from her father, an independent oil producer, and in teaching from her mother. She graduated from the University of Illinois in Home Economics Education in 1932 and taught in Lawrenceville, Illinois. She was then the first home economics extension agent in Christian County, Illinois. Encouraged by her state leader to pursue a Master’s degree, Louise attended the University of Missouri writing her thesis on the use of consumer credit by farm families. She stayed on at Missouri as an instructor and supervisor of the home management house before being appointed to UW in 1945.

Louise was involved with numerous organizations, including the Wisconsin Home Economics Association, the American Home Economics Association, the American Council on Consumer Interests. She was a charter member of the Wisconsin Consumer League and on the boards of directors for the UW Credit Union and the Madison Gas and Electric Company (its first female member).