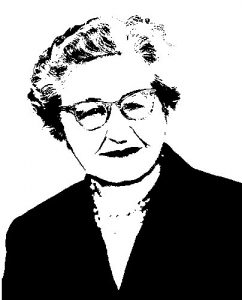 May S. Reynolds (1891-1986) (MS 1924 Foods & Nutrition; PhD 1936) began her career as a teacher in Iowa and later became a researcher with biochemist Harry Steenbock and nutritionist Helen Parsons at UW-Madison. Reynolds was named a 100 Women honoree as the result of a collaborative effort initiated by Dorothy Pringle (MS 1951; PhD 1956 Nutrition). Reynolds’ first published research, a 1924 article co-authored with Helen Parsons, demonstrated that rats could synthesize their own ascorbic acid, while guinea pigs, like humans, could not. Later, her research focused on the protein needs of humans, examining the protein content of soybeans and the influence of nutrients on protein metabolism. In 1958, she received the Borden Award from the Association of American Medical Colleges. Her daughter Margaret Nelson (1916-1993) (BS 1937; MS 1955; PhD 1965) followed in her mother’s footsteps, also earning degrees from the school, and worked as a Consumer Science professor until her retirement in 1986. Reynolds and Nelson have been the only mother-daughter pair to work as professors in the School. In 1961 at age 70, Reynolds and Frances Zuill, retired head of Home Economics, consulted at three colleges of home economics in Pakistan. After returning to the US, Reynolds became a visiting professor at UW, Pennsylvania State University, Brigham Young University, and the University of Delaware.