The new Nancy Nicholas Hall is completed in 2012, featuring contemporary studios and classrooms, exhibition and textile collection space, a café, and an in-house child development laboratory. Dr. Soyeon Shim from the University of Arizona is named dean. 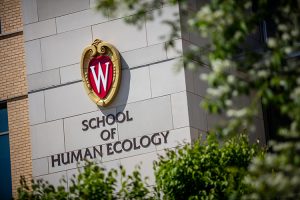 In 2010, a crowd of more than 200 gathered for the groundbreaking of the new School of Human Ecology building. The $53M project was designed to expand the new building west across land previously occupied by the Child Development Lab and the Home Management House. As estate gift from professor Ruth Danielson Davis becomes the catalyst for the Ruth Davis Design Gallery. All programs, faculty, staff, teaching and administrative services relocated to seven locations across campus for the three-year construction period.

On May 21, 2012 the School of Human Ecology began moving into the completed new building, Nancy Nicholas Hall just prior to the retirement of Dean Douthitt.

Meet Dean Soyeon Shim and learn more about what it means to be a human ecologist in the 21st century.