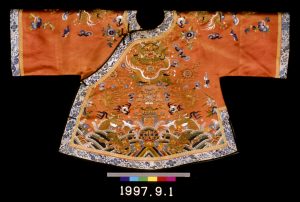 As a student from China, I grew up learning about Chinese history and watched many historical TV programs. I was always obsessed with historical Chinese clothing, but I never had a chance to take a look at those fabulous garments until I started working with the Helen Louise Allen Textile Collection. When I was browsing the Chinese textiles in the Collection, this women’s short jacket caught my eye.

This jacket originated between 1875 and 1900, which is the late Qing dynasty in China’s history. This short jacket is collarless with a right-side fastening that is typical of women’s wear in Qing dynasty. There are delicate embroideries that depict dragons, phoenixes, lions, birds and many other symbols and animals on this jacket of red silk. These motifs are sewn with multi-color silk and gold-wrapped threads that show the great value of this jacket. 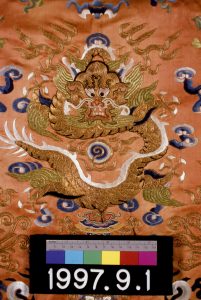 Since the Qing dynasty had a very strict hierarchy, the design of clothing was an important point to differentiate people from different social and economic levels. The dragon and phoenixes motifs were representative of the level of emperor, emperor’s brothers, empress, and also might have included concubines of emperor. Phoenixes were often decorative markers of women’s wear, so this jacket should belong to an empress or concubines of emperor. The silk fabric also was limited to wearers of high status. This short jacket clearly shows the features of women’s clothing in the Qing dynasty, which was a rigidly stratified feudal society.

Overall, the elaborate embroidery and the wide range of color uses are really amazing. It is hard to believe that this women’s short jacket is an artifact from more than 100 years ago. The complicated design and great enrichment shows the superb textile technology during the Qing dynasty. Looking at this garment can lead to an image of the flourishing scene of textile industry in the Qing dynasty. As a Chinese student, I would like to learn more about the techniques and methods from traditional Chinese textiles and incorporate them in my designs.

Discover more about this piece.