Written by Nghi Tuong, a third year student in the School of Human Ecology, studying Retailing and Consumer Behavior. 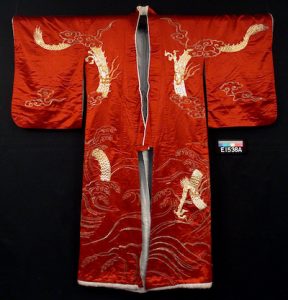 I chose to write about this Japanese kimono from the 1930s because I have always been attracted to things that are red, so the background color and the beautiful gold embroidery that highlights it immediately piqued my interest. In Vietnam, where I was born, the color red is a very lucky color.

The word “kimono” was originally a Japanese word for “clothing”, but it was later popularly used as a specific type of Japanese traditional wear. The kimono originated in the Heian period from 794 to 1192. From then, new techniques and styles of the kimono were created. This particular kimono from the Helen Louise Allen Textile Collection is made of woven silk in a bright red color with gold embroidery. In some cultures, the color yellow is deemed to be the color of the sun but in Japan, it is believed that the sun is red – similar to the national flag. Originally extracted from the safflower, the color red was considered favorably and also symbolized happy occasions. 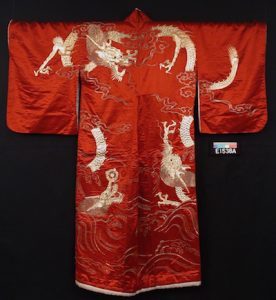 This red kimono is padded with a layer of what appears to be wool to keep the wearer warm. The kimono has extravagantly long sleeves and is floor length. It is embroidered with shiny gold thread, which contrasts vibrantly with the red ground, portraying dragons. Dragons are legendary creatures of Japanese mythology that were believed to be a water dog, controlling rain and bodies of water. They were believed by some to be the ancestors of the first ever emperor of Japan and symbolized royalty, prestige, power, and honor and held the balance of the world together. Because the Japanese dragon is a long serpent-like creature, the body is sewn weaving in and out of the clouds on the kimono. The gold thread is wrapped with another delicate gold fiber making it shiny. The dragon itself varies in appearance among those cultures such as China and India but the symbolism is commonly overlapped. In Japan, the dragons on garments such as this kimono are worn by emperors and empresses, the noble, and the wealthy.

Discover more about this piece.