Marina Moskowitz is the Lynn and Gary Mecklenburg Chair in Textiles, Material Culture, and Design, in the Design History department of the School of Human Ecology.

Around this time last year, I was researching a particular set of textiles in the Helen Louise Allen Textile Collection in preparation for giving the Ruth Ketterer Harris Lecture: table linens made by the Folly Cove Designers, a group of ‘designer-craftsmen’ (as they called themselves) who carried out exquisite linoleum block printing on fabric from the late 1930s through the late 1960s. This past summer I had the opportunity to carry out further research on the Folly Cove Designers in the archive at the Cape Ann Museum in their hometown of Gloucester, Massachusetts and view an exhibit about two of the designers, sisters Margaret (Peggy) and Dorothy Norton. 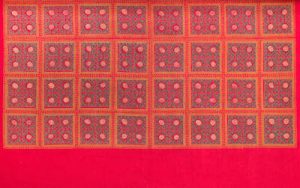 We have a few textiles designed by Peggy Norton in the Textile Collection. While the majority of Folly Cove work was printed in a single color from one block, Peggy Norton experimented with multi-color prints created from several linoleum blocks that are inked in different colors and printed on the fabric in sequence. Mulberry Maze (left) is one example of this technique and I was lucky to be able to see each of the four separate blocks for this pattern and sample prints that demonstrated each layer of the printing process. Our version of Mulberry Maze is also unusual for the Folly Cove Designers because the vast majority of their designs were printed on white or ecru fabric, but this colorway is printed on red woven cotton; there are other versions of this design that are printed in either green or blue inks on light fabric.

Although we do not hold any designs by Dorothy Norton in the Helen Louise Allen Textile Collection, the story of her influence 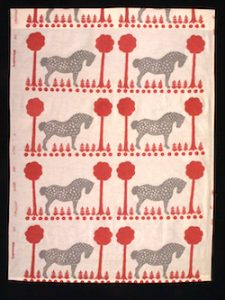 on the Folly Cove Designers can still be told through our collection. In addition to designing and printing blocks herself, Dorothy Norton was the Business Manager for the Designers: she handled distribution of the linens, purchased supplies in bulk (locating fabric during World War II was an ongoing challenge), ran the on-site shop that operated in Folly Cove during the summer months, filed taxes, and, importantly, negotiated licensing agreements with department stores and home furnishing companies. The Textile Collection holds several examples of Folly Cove designs that were printed by the Schumacher Company, including this print of Polka Dot Pony (right).

While some stores, such as Lord & Taylor, replicated the Folly Cove designs in silk screen, Schumacher’s did carry out block printing, though on a much broader scale than the Folly Cove printers—who primarily worked in their homes—could do on their own. Although Polka Dot Pony is the design of Hetty Beatty Whitney, this large-scale furnishing fabric printed by Schumacher would not have been produced without the clever negotiations of Dorothy Norton.

For more information on Mulberry Maze.