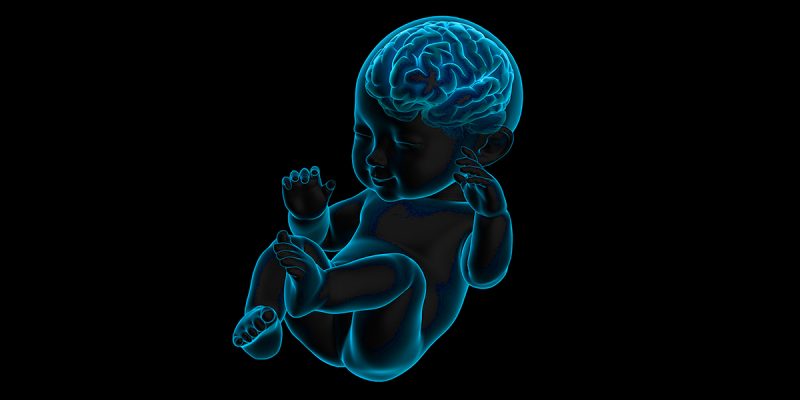 For millennia, parents have gazed into their babies’ eyes and wondered, “What are they thinking?”

And yet the actual workings of infants’ brains have remained a mystery — until now. The University of Wisconsin–Madison is one of just 25 sites participating in the HEALthy Brain and Child Development (HBCD) Study, which will examine how young children’s brains and behaviors develop under both healthy conditions and when exposed to a parent’s substance abuse or other stressors.

The pioneering study, which is spearheaded by the National Institute on Drug Abuse and funded by other divisions in the National Institutes of Health, involves leading childhood development scholars from across the nation, including Julie Poehlmann-Tynan, the Dorothy A. O’Brien Professor of Human Ecology and professor of Human Development and Family Studies. Poehlmann-Tynan is leading the Madison research site with Douglas Dean III, an assistant professor of Pediatrics and Medical Physics and researcher in the Waisman Center.

The HBCD study is significant because of its scope and size, following about 6,000 children across the United States, notes Poehlmann-Tynan, a clinical child psychologist.

“A large sample size is rare in longitudinal studies of children’s brains and development,” she says. “Part of what makes this a landmark study is we’ll have greater data for comparison. We don’t even have nationally representative data right now. This study looks at families across the income scale, across race and education levels, and all over the country. We’ll get a really good look at what’s happening with babies’ brains as they develop — what’s going awry and what’s protective in terms of well-being over the long term.”

Investigators plan to begin enrolling families this summer and then will follow them over the five-year grant period, with the expectation of a five-year extension after that point. The Wisconsin site will follow 300 babies: 1/4 who have been exposed prenatally or postnatally to substance abuse, 1/4 who have other risk factors (such as living in poverty or in neighborhoods with high crime rates) without substance abuse, and 1/2 without specific risk factors.

The focus on vulnerable babies is critical in the wake of the opioid crisis, Poehlmann-Tynan notes. “We don’t really know much about how prenatal and postnatal opioid exposures affect the brain and behavior development of infants and young children,” she says. “We’ll get to learn about what helps babies be resilient, even if they have a challenging beginning, and hopefully that will lead to new ideas for interventions.”

To get a better window into what’s happening inside growing brains, the investigators will use magnetic resonance imaging (MRI) and electroencephalography (EEG), along with parent questionnaires and direct assessment and observation of infants and young children. As kids get older, researchers will also interview them directly.

A School of Human Ecology graduate student will support the study, and undergraduates will help interview families. Once collected and analyzed, the data from all 25 sites will be shared in a public database. “Our goal is to make the information as publicly available as possible,” Poehlmann-Tynan says.

Since the project launched in October 2021, the Madison-based team has recruited a community advisory board, including women who have experienced substance abuse disorders. “It’s really important to include people with lived experience so it’s not just about them, it’s with them,” she notes. “We want to learn about the struggles and achievements and be successful together.”

Although planning for the study started before the COVID-19 pandemic, the research team has since pivoted to include some remote assessments and to look at the impact of COVID-related stressors.

“It really shows how vulnerable the pregnancy and postpartum period is for babies and their moms,” Poehlmann-Tynan says. “During the pandemic, more kids have been falling into poverty, and then there are the disruptions to childcare. It really is a challenging time — we know parental stress is a very real issue during the pandemic, and we’ve built some measures to look at that.”

The study’s data will also be fertile ground for other research, particularly for designing and testing future interventions, she notes. “Brain development is so rapid in the first few years of life,” she says. “We think if we can get in there early and promote what’s working, then we can help vulnerable babies do well.”