While doing research for an upcoming project on textiles and American politics, this exquisite example of needle lace immediately caught my attention. Created out of cotton or linen, not much is known about this item; the collection records simply note that it was created between “1950 – 1990.” The mat is only 7” in diameter but the delicacy of the craftsmanship means that the detail contained therein is incredibly impressive. The mat is a circular open-worked field with an eagle in the center. The eagle is holding an olive branch in its left talons and arrows in its right. On its chest we see a shield the top half of which is solid and the bottom half striped. Above the eagle’s head are thirteen stars. Most Americans will recognize this design as the Seal of the President of the United States but not many of us may be familiar with its history. 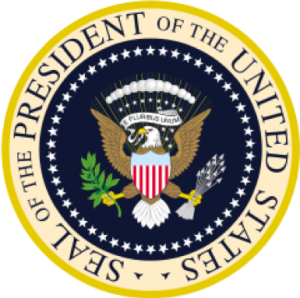 The seal is used today in many ways: it is located on all presidential correspondence; the side of Air Force One, Marine One and the President’s limo; mounted in the center of the oval office ceiling; on the iconic rug in the Oval Office along with other locations in the white house; and the reverse side of the John F. Kennedy half dollar coin. The original function is thought to have been the image on the wax seal used by the President of the Continental Congress. Initial versions of the design included thirteen stars (representing the thirteen colonies) with the head of the eagle facing right, towards the arrows gripped in his right talons. Little history exists on its evolution between the nation’s founding and when the design was reworked by Millard Fillmore during his presidency in 1850 at which time the position of the eagle’s wings was changed and stars were added in order to match the current number of states in the nation (31). (It was altered in this way again in 1960 when Hawaii was declared a state and the number of stars capped at 50.)

According to current accounts, the most drastic change to the seal was made by Harry Truman in 1945 who ordered that the eagle’s head be turned toward the left instead of the right. In the wake of World War II, Truman was in the process of transforming the War Department and Navy Department into the Defense Department and there was much focus in the country on peace. Truman felt very cognizant of the aggressive nature of the eagle facing the arrows that was present all over the White House and wanted to make a symbolic change that reflected the nation’s evolving ethics around war.

It is a compelling story to say the least but even a small amount of digging in the Helen Louise Allen Textiles Collection presents us with items that challenge its veracity or, at the very least, its simplicity. On the same day we pulled this lace mat out for closer inspection, we also pulled handkerchiefs printed in 1804-1808 and 1905 that each featured a version of the seal with the eagles’ faces pointed towards the left. Without a more comprehensive history of the seal’s design, we cannot know for sure if the eagle’s position has simply changed frequently over the course of our country’s history or if the tale of Truman’s symbolic action is yet another political myth.

It is also possible that the seal operates under different rules than other visual depictions of an American eagle. Which begs the question: what makes a seal “official” and who gets to make that distinction? Think of it in terms of a logo. We can draw as many green mermaids as we want without running into copyright law but if we get too close to the Starbucks logo we are in trouble. Are only officially sanctioned and labeled versions of the eagle design considered the seal of the president and, thus, present “correct” eagle head positions? Even this mat features all the required imagery–so if it wasn’t produced in an official capacity, can it be considered the seal? How do we know what is and is not official and how has that changed over American history? These are great questions to think about.

If the mat is the seal of the president and we believe the truth of Truman’s design change, then the position of the eagle’s head on our lace mat indicates that this piece was created after 1945. There are 13 stars in this 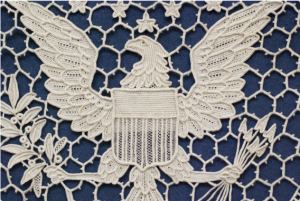 iteration of the design; whether that was an intentional reference to earlier versions or a choice aided by the material constrictions is unknown. Seeing the work up close really drives home the level of absolutely perfect craftsmanship; each stitch is incredibly tiny and impeccably placed – to such a degree that we even wondered if it might have been mass/professionally produced. Unfortunately, all information about the maker has been lost so we are left to make our own deductions.

What’s striking to me is the disparity between political and non-political spaces. By making presidential imagery into a soft and delicate object for the home, the maker welcomed presidential politics into their most private of spaces. Much in the same way that the Oval Office rug functions, the lace mat places a seal of approval onto whatever domestic surface it sits upon. The delicate and time-consuming nature of the craft represents real commitment to content, almost amounting to adoration. Perhaps this was a post-war homage to peace and American victory: a way to welcome a shift in political landscape into the heart and home of a single maker.