When faced with a lack of information about a historic textile, museum curators use many contextual clues such as textile structures and material or dye types to help identify how old a textile is, where it came from, and who might have created it. Until the mid-19th century, when the first synthetic dyes were invented, humans used natural sources from plants, animals, and minerals to dye fabrics and fibers. This fact makes researching and identifying objects from that time period more complicated. Though the first synthetic dyes often produced “unnaturally” electrically bright shades, some natural dyes, like cochineal, an insect-based dye, could produce similarly bright colors under the right circumstances. 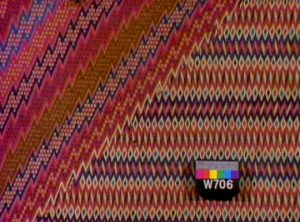 A perfect example of this color conundrum is present in the Saltillo serape from the Helen Louise Allen Textile Collection, recently on display in the exhibition Intersections: Indigenous Textiles of the Americas. Dated to the early 19th century, the dyestuffs used to dye the serape a brilliant range of reds, purples, and blues, are unconfirmed. If it is as old as the records claim, then indigo and cochineal were most certainly used achieve the blues and reds respectively (and combined for the purples).

“While the object’s size, motifs, construction, and fiber content are all of the right description for a serape made in Saltillo, Mexico, during this period, it is possible that a similar looking serape from a slightly later date could have been misattributed,” remarked co-curator of the Intersections exhibition, Dakota Mace (co-curated with Kendra Greendeer). “If a dye analysis comes back with synthetic dyes, then we’d know for certain that the object is from a later date. Of course, natural materials could have been used later, but for our purposes in the exhibition, materials and dyes, like indigo and cochineal, are a central narrative in one our sections that talks about the importance of these materials to the lifeways of Indigenous people of the Americas. So we wanted to be able to say with 100% certainty that these two natural dyes were used.” Additionally, knowing the dye content of a piece also helps researchers understand other important historical patterns of production, consumption and markets, design, and use of raw materials. 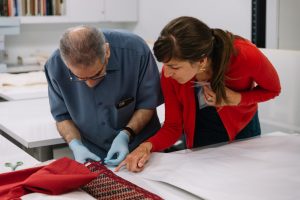 In order to confirm which dye was used, HLATC staff enlisted the help of Rothermel Bascom Professor Majid Sarmadi, who teaches textile science in Design Studies Program at UW-Madison’s School of Human Ecology. Dye analysis methods range from a recopy analysis which uses simple, but potent chemicals to more complex methods like non-destructive surface analysis by 3D fluorescence spectroscopy and surface-enhanced Raman scattering (SERS) that test for the organic colorants in objects.

As curators were primarily interested in confirming the presence of cochineal or indigo, the simple recopy analysis method was used. Professor Sarmadi explained “a recopy analysis method, using simple acids provides an approximation of dye classes, only indicating if a specific dye is present or not.” If the dye in question is not present, then a different test would be needed to determine which type of dye was used. 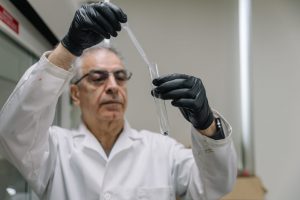 To begin the analysis, objects are first examined for suitable areas from which to collect a sample. Minute samples of fibers are cut from a textile in areas where fibers are already loose, but stable, and importantly, not integral to the structure of the textile. This is usually in a place where damage, like fraying along a hem, has already occurred. It is vitally important that collecting a sample will not harm or further damage the textile.

In the end, as curators suspected, dye analysis results showed that the serape was indeed dyed with indigo and cochineal. Not only was it rewarding to have our predictions confirmed but it reinforced how masterfully dyers and weavers were (and are) able to achieve then combine a rich variety of colors to create such visually stunning and complex designs like in the Saltillo serape.