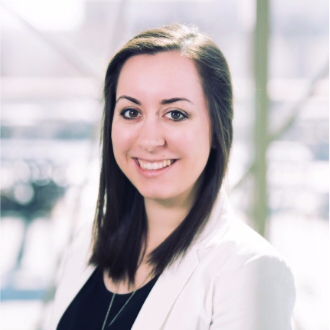 Lisa Johnson (’17), an Interior Architecture major, has made big moves since graduating this past May. Just months after getting her degree, Lisa now lives and works in New York City at a successful design firm called ICRAVE. Finding a steady job after graduation is a stressful prospect for many students, so Lisa filled us in on the steps she took to get to where she is today, and on pointers she had for current undergrads.

It was a giant leap of faith, but now that I’m settled and enjoying the job, it was totally worth the stress and hard work that led up to it.

Even if you’re already a junior or senior it’s not too late to get involved in organizations and make connections. In the spring of 2016, just a year before she was set to graduate, Lisa was nominated and chosen as the Student Representative to the Board for the Wisconsin chapter of ASID, the American Society of Interior Designers. It was at the ASID Chapter Leadership Conference that summer that she first heard about ICRAVE. Here she was able to meet with designers from across the country and learn about projects and services being offered by various firms. 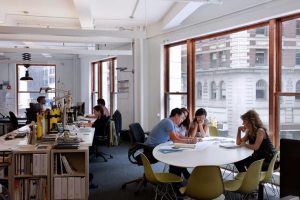 When Lisa found herself jobless with only a few months left until graduation, she began reaching out to all of her professors and friends from the interior architecture department. After remembering the ASID conferences keynote speaker, a director from ICRAVE, she decided to go out on a limb and try to get in touch with the speaker. Two weeks later, just as she was losing hope, Lisa received an email from the CEO of ASID, Randy Fisher, who personally introduced her to the ICRAVE director. She spoke to the director on the phone, bonding over their shared midwest roots, and was told to they would review her resumé and portfolio. Shortly afterwards, she was offered an interview! Lisa said in retrospect that the best advice she received was to be persistent, adding that “you really need to keep on top of people, in a polite way, and get them to notice you! I sent out countless of emails/resumes that really went no where which was frustrating but all it takes is one. I think you also have to be really committed and tell potential employers that I will be in town on these dates and would love to stop by and meet you in person.”

By spring of 2017, Lisa had already decided that she would move to New York whether she had a job by graduation or not. After graduating on Saturday, Lisa flew out to New York on Sunday and interviewed with ICRAVE on Monday. While in New York, Lisa took advantage of the networking opportunity and connected with another interior architecture alum who works at Gensler. She also reached out to the NY ASID, grabbing coffee with one of the membership directors in order to gain some insight on their chapter. Ultimately, Lisa believes that deciding to move no matter what helped her in the end; “I let the ICRAVE team know that I was going to be moved out there by June, which I think really helped make me a stronger candidate.”

Want to make a move on your future? SoHE has Internship and Career Preparation resources that are designed to help current students and recent graduates land their dream jobs. You can meet with a career advisor to devise a job search strategy, practice interviewing, have your resume reviewed, and more. Take a look!

If you’re an alum and have any advice for current students, email us at t3@mail.sohe.wisc.edu

Providing Student Support
Annual gifts provide immediately available discretionary funds that the Dean uses for recruiting and producing SoHE’s leaders of tomorrow. Individual support makes a lasting impact on the lives of our talented young scholars by turning their dreams of an excellent education into reality. Click “All Ways Forward” to start making a difference.