Marina Moskowitz is the Lynn and Gary Mecklenburg Chair in Textiles, Material Culture, and Design, in the Design History department of the School of Human Ecology.

On December 6 and 7, the Center for Design and Material Culture hosted a scholarly symposium, entitled “Teaching Textiles: Histories of Craft Instruction” as the final event in what has been a busy year-long program celebrating the 50th Anniversary of the Helen Louise Allen Textile Collection. Twenty international speakers with a range of expertise presented papers on the varied ways in which the skills of making and embellishing textiles has been transmitted both within and across communities, geographies, and chronological periods. At the heart of this event was a visit to the Mary Kunz Berge classroom where we had pulled a selection of textiles related to both specific paper topics, ranging from 16th-century Italian embroidery to 18th-century woven coverlet fragments to 20th-century modern British screen prints, and the overarching theme, for which we looked at a variety of samplers and textile kits. 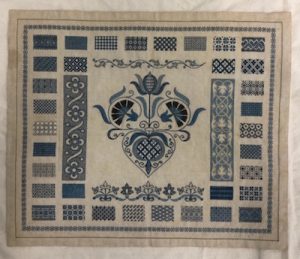 The early 19th-century German sampler featured here became a talisman for the event. While some samplers are evidence of the processes of teaching and learning different types of textiles skills (such as knitting, mending, and embroidery), others demonstrate the attainment of those skill and serve almost as a “diploma” or “calling card” for those who have reached the height of their craft and wish to promote their skills. This remarkable embroidery sampler is surely in the latter category.

Part of the discussion at the symposium centered around the ways in which making and replication of textile skill is a form of historical research, and to that end we encouraged the participants to not only write, listen, and discuss, but also try their hand at a range of skills. Using the sampler above as inspiration, current Design Studies MFA students Amanda Thatch and Nora Renick-Rinehart collaborated on the design and printing of “project bags” (images below) for the symposium attendees, who also received needles and cotton embroidery floss to embellish their own interpretations of this design.