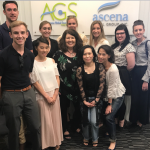 This May, Teaching Professor Dr. Nancy Murray spent the month in China with a group of students studying abroad for the semester. During this time, they visited factories and global sourcing offices as a part of her three week course, Product Development Strategies in Retail. Among these stops were e-commerce giant Alibaba, global supply company Li & Fung, and Macy*s China. The group even had an opportunity to connect with UW alumni, including Retail and Consumer Behavior Graduate Penny Peng (’16), at the Founder’s Day Celebration in Hong Kong. See photos and more details from their trip here.

Papermaker and SoHE MFA graduate Hannah Bennett is the artist-in-residence at the Madison Central Library’s The Bubbler. Throughout May and June, she has held open studies and led several workshops for children and adults alike. In an interview, Hannah talks about the connection between farming–a large part of her life before and after college–and making art using primarily natural fibers and dyes and “manipulating those materials [to help] her see the world and its natural laws.” Find more information about Hannah’s residency here, and read her interview in the Wisconsin State Journal here.

As part of a science column on Tuscon.com, Associate Professor Dr. Heather Kirkorian explains how toys affect a baby’s development. Emphasizing the importance of play, she details the impact on cognitive, social, emotional, and language development. Interestingly, she goes on to say that oftentimes the toys that might seem “the coolest,” with interesting features, sounds and screens may actually be less beneficial for babies and toddlers. Read her entire response here.

Executive Director of CommNS Mary Beth Collins was recently chosen by Dane County’s chapter of Big Brothers Big Sisters as “Big Sister of the Year,” an honor given to the program’s top mentors. Collins has been mentoring JaRon Dorenzo, her “little,” for over six years, beginning when Dorenzo was ten years old. The two now share a bond that is “just like family,” taking camping trips, attending basketball games, fishing, and doing other outdoor activities both enjoy. When prompted for advice for future mentors, Collins encouraged individuals to “just do it,” without focusing on time commitment and other potential deterrents, adding that it is “so worth it.” Read the entire Q&A with the pair here. 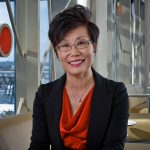 Research conducted by Dean Soyeon Shim and her research partner, Joyce Serdido of the University of Minnesota, was featured in an article for New York Magazine and an interview with Wisconsin Public Radio on Monday, exploring determinants of students’ financial well-being. At first, the study appeared to show a strong correlation between a student’s financial responsibility and their family’s tendency to discuss finances together. However, further analysis showed that students who believed they had the capability to learn to manage money had much higher chances of achieving financial well-being after graduation than those who didn’t–and they tended to make more money, too. Read the NY Mag article here, and learn more about Dean Shim’s WPR interview here.

In an article published on the website Fatherly, Human Development and Family Studies Assistant Professor Margaret Kerr discusses her research into the emotional experiences of parents–in particular, fathers. Due to historically enforced gender roles, research on how motherhood impacts women is abundant while studies on fatherhood are scarce and, according to Kerr, often conflicting. She is currently studying self-reported emotions of new fathers, spanning from pride after teaching a child new things to pain from feeling their child is less attached to them than their mothers. Read more about Kerr’s study of this phenomenon here.