By Gretchen Meyer, a second-year student in SoHE, studying Retailing and Consumer Behavior. 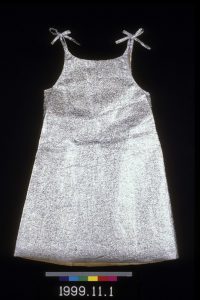 While browsing through the Helen Louise Allen Textile Collection, I was in love with so many of the pieces. When I came across this stunning dress – a beautiful, glittery silver shift dress with a 1960s vibe to it – my initial reaction was, “Wow I’d love to wear that!” It is so gorgeous and has similar structural features to dresses worn during the 1960s. Specifically, the shapelessness of the dress was trendy during that time period, as well as the A-line and the knee-length. It almost looked like a dress a woman would wear to a disco party. Glittery dresses have always fascinated me, but typically the actual glitter makes the fabric more 3-D. This dress was so thin that I was intrigued as to how the designer managed to make it.

I thought that the glittery material of the dress was particularly interesting, as it was extremely thin, and felt almost like a paper bag. The inside of the dress was not the same silver glitter as the outside, but rather a beige color similar to that of a manila envelope. I was curious to find out why this dress was made with that particular material. I found from the Helen Louise Allen Textile Collection website that the designer of the dress was from Reynolds Metals Company. Reynolds is the world’s third largest aluminum and packaging company. I also learned that it began as a cigarette packing company, but later expanded to make other products to fulfill consumer’s needs. The fact that the dress was made by an aluminum company makes in unique and shows the diversification of this company’s products.

On the collection’s website, I learned that the dress is actually unfinished. It is made up of two halves which are hemmed at the arm holes and neckline (hence the ties at the shoulders.) The bottom half was left unfinished, but I actually like the look of it that way. I think the simplicity of the dress adds to its beauty and character. Overall, this stunning dress would be a unique staple in one’s collection. It certainly grabbed my attention from all the beautiful textiles, due to its unusual and shiny finish.